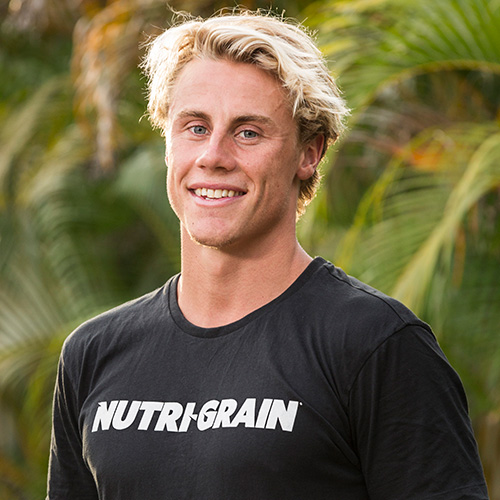 Matt Bevilacqua is an Australian Ironman who also suffers from a mild form of EB Simplex. Despite struggling with the condition, Matt has forged ahead with his Ironman career.

Matt joined his local surf life-saving club at Clifton Beach as a nipper, and later commenced competitions.  At just 16 years old, Matt became the youngest person at the time to win the Tasmanian Open Ironman title – a race he went onto win three years in a row.

After completing school Matt chose to pursue his dream of becoming an Ironman and moved to Mooloolaba to train with the Michael King Ironman Academy.

Matt was also crowned the 2015 Queensland State Ironman Champion, and in 2016 finished 2nd in the legendary Coolangatta Gold race. In August 2017, Matt won the gruelling Molokai to Oahu paddleboard world championship for the third consecutive time, beating his own record by 12 seconds to finish in 4 hrs, 29 minutes and 32 seconds.

As a child growing up with a family history of EB, Matt became aware of the impact EB has on lifestyle and participation in sports and other events. Matt feels privileged to be an ambassador for DEBRA as it will allow him opportunities to raise the profile of the disease, raise money for research and to meet children and families who courageously overcome the daily challenges of EB.